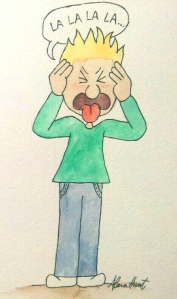 Do you remember telling those who were saying mean things to you that “whatever you say bounces off me and sticks to you?”  I think most of you do remember.  It was an attempt to not allow what others said about you to define you.

Well, we’ve grown up.  I don’t think much has changed.  Or has it? Our language has become more sophisticated but it has also become increasingly abusive.

It is getting increasingly difficult to have civil conversations.  Have you noticed that? The problem with this decrease in communication is that we all end up in those closed systems I spoke about in my post on intellectual and cognitive laziness.

But how do we speak to each other in a way that facilitates the opening of our eyes, ears and hearts? In what manner can we speak that does not lead to that glazed look that says….I’m not listening….or worse, totally shutting the message out with eyes shut tight, fingers in ears and heart hardened?

Truth without Grace is abuse

When we speak with passion and emotion we may be speaking Truth, however, in the absence of Grace we are not communicating we are attacking.  Name calling, ad hominem attacks, and crude language do not open anyone’s heart, much less their eyes and ears.

You can find many, many examples of this in our national debates on issues that spark emotion, and, as I’ve said before, it has become difficult to communicate without resorting to such tactics.  If you do not say anything “edgy” your blog post won’t get much attention.  Nor will your other social media musings.  Don’t get me wrong….I enjoy a bit of sarcasm and parody, however, when it crosses the line the message becomes less effective.

I guess it is completely human of us to behave in such a way.  We talk constantly about

wanting to hear “good” news instead of all the “bad news” yet we pay more attention to the bad news.  People pick up the magazines and newspapers with the headline about some terrible tragedy and barely notice or become quickly bored with news that could bring  joy to our hearts.

I am not saying that attending to distressing news is something we should never do.  We do have to maintain an awareness of the dangers and injustice in this world, but to completely ignore the good things is not healthy.

When we feel strongly about something we tend to let our emotions carry us into using language that is not helpful.  When you have been pushed, nudged, or poked you will eventually feel the urge to use language that does not include the concept of Grace.

Hence, we end up shouting at each other and hear and understand nothing.

Grace without Truth is deception

This is the part I have struggled with for years.  How does one communicate Grace in a way that does not ignore Truth?

I will take a short side trip here to explain the difference between Truth and truth.  Truth with the big T should never be compromised.  Truth with the little “t” is still true on a certain level, but it may not be actually true.  Let me explain.

In telling stories from your personal life you may remember a relative who you were really close to.  You knew them well and you knew what kind of person they were.  Bottom line that is Truth.  If, however, you remember a story about a specific incident involving them you might not remember every minute detail.  So, if your father was someone who always encouraged you and loved you unconditionally and you “recall” a conversation in which he said, “You can do anything you set your mind to” it may or may not be Truth.  But it IS truth in the sense that it is the kind of thing he would have said.  The words are not out of character for him and he probably did say something like that to you at some point.

What we need to do is communicate Truth without leaving Grace out of the equation.

We also need to attend to including Truth in our communications in which we aim to communicate Grace.

This is perhaps the most difficult task.  I often wonder how DOES one communicate a Truth that is difficult to hear and still include that concept of Grace?  I think of Dietrich Bonhoeffer trying to tell people about the atrocities going on in Nazi Germany.  How does one communicate that someone is doing something terrible without seeming to offend?

I am also reminded of something I read about Mr. Rodgers.  He was perhaps the kindest, gentlest man we’ve knew while we were growing up.  He had many good things to say and many of them were True.  However, some took exception to him stating to people who were homosexual that “God loves you just the way you are.”  That is True on one level. God does love us all.

The statement, however, leaves out the part where God gave us guidance on how to live happy and fruitful lives. There are things that we do that are harmful to ourselves and others.  I believe what many people forget part of the story  when Christ says, “let he who is without sin cast the first stone.” He also says, “go and sin no more.”

Speaking Grace without Truth is exactly like that.  It might feel good but it will not lead us to happy and productive lives.

I was visiting my son who is in college and found the following: 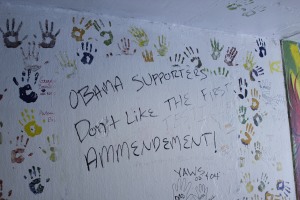 I do, however, see from the comments that those who shared a viewpoint that diverged from the Progressive world view of individuals who support President Obama and his policies were deemed unacceptable and covered over.

This example also shows that the individuals responding to the obliteration of their comments went from depicting their detractors as “Obama supporters” to “Obamanoids.”  I’m thinking the latter does not contribute to the dialogue.  Neither does simply painting over someone’s opinion.

This demonstrates a microcosm of what is happening nationally.  Consider, for instance, the debate about our Second Amendment.  One of the recent articles that disturbs me most is LaPierre et Le Deluge. It begins:

As I said on Current TV a couple of nights ago, I have never seen a situation in which a Congress, terrified of a particular lobby, has behaved in such open contempt of American public opinion as it’s doing now on guns.

Of course the “American Public Opinion” is linked to a poll on the Mayors Against Illegal Guns website.  This is supposed to confirm the author’s statement that the majority of NRA members agree with common sense laws with regard to firearms.

However, if you understand what Progressives REALLY mean by common sense laws and regulations you will know that it means it is just the beginning of their getting what they REALLY want.  In spite of the condescending “no one wants to take your guns” statements made by our President and the Progressives who share his world view, the ultimate goal is to basically eliminate our Second Amendment rights.

Wayne LaPierre may have won the week, and he may slither away without Congress doing anything this time around. But the laws of physics are such that he can’t do this forever. He’s like Louis XVI in about 1788. He may be on top now, and his hard-line posture against any and all change may serve him well for the time being; but the revolution is coming, and once it arrives, we’ll beat the NRA, and he’ll be a figure not of power but of ridicule, left to ponder the what-ifs.

Slither away? Louis XVI? This is not the first time that Conservatives who wish to restore our Constitutional Republic have been threatened directly or indirectly with the guillotine. The author goes on to insinuate that the NRA will get what it wants “over more corpses of more dead children.” In essence he refers to those who would protect their Second Amendment Rights with murderers.

I don’t see much Grace there.  Then again, Progressives do not accept the concept so I guess it is not surprising.  I understand their world view because I’ve spent the last four years learning exactly what it is that they believe.  I am frightened by what I see.

So, what we have is them following Alinsky’s rule #4: Make the enemy live up to their own book of rules.  In that contest they always seem to “win” the argument because they have “rules” but they are changeable.  Nothing with them is clearly right or wrong.  What WORKS to get them what they want is deemed the right thing to do.

How do you have a debate with someone like that if you hold a Christian world view? How do you communicate a difficult Truth with Grace to someone who does not on any level accept that Truth exists?

We are left with something referred to as “The Great Lie” in Chuck Colson’s book How Now Shall We Live:

“The Great Lie is that we have the capacity, like God, to create our own standard of right or wrong.  It is a lie repeated so often that it has become the accepted wisdom of our culture. “(page 195)

I do not believe it is wise to view our world in this way.

Colson goes on to say:

“The price for rejecting the Christian world view is that when morality is reduced to personal preferences and when no one can be held morally accountable, society quickly falls into disorder…..then, when social anarchy becomes widespread in any nation, its citizens become prime candidates for a totalitarian-style leader, or leader class, to step in and offer to fix everything.” (page 199)

That is why we need to continue to speak Truth with Grace; to be a part of the discussion even if we are attacked for doing so.  Even if it becomes dangerous to do so.

If we do not do this, who will?